We started off very early in the morning, and our first stop today was "L'Aventure du Sucre"; Beau Plan sugar factory. Sadly the sugar mill had to shut down in 1999 - after 202 years running. But the history doesn't stop there; the mill is turned into an amazing museum. It not only tells the history of sugar, but also covers the history of the island; slavery, the rum trade and so much more. Most of the machinery is still in place and former workers are on hand to answer questions. There are different varieties of sugar to taste and to buy. I bought a little box molasses (very dark sugar), I love that kind of raw, burnt taste. :) 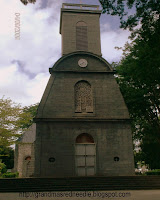 We visited the St Francois church in Pamplemousses, which was built in 1756 and is the oldest church on the island. The cemetery contains the tomb of Abbe Buonavita, who was Napoleon's almoner on St Helena. He settled in Mauritius after Napoleon's death in 1821.
Bernardin de Saint-Pierre wrote the famous novel "Paul et Virginie" in 1788. The novel was inspired by a tragedy that took place some years earlier, when the ship "St Geran" was wrecked during a bad storm near the
tiny island of Ambre, at the east coast. There's a monument of Paul and Virginie next to the church.
After visiting the sugarcane museum and the church, we needed something to eat and ended up at Wiener Waltz Cafe for some treats. I couldn't resist a slice of homemade Sachertorte (rich chocolate cake) and coffee. What a slice; it was HUGE - and DELICIOUS! :) Grit had a huge bowl with ice cream and hubby had a huge slice of cheese cake - and we had coffees too. 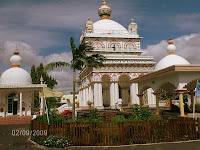 Maheswarnath Temple in Triolet. It is the largest Hindu temple on the island, built in 1857. Personally I think this is the most beautiful temple here as well...

"Sir Seewoosagur Ramgoolam Botanical Garden" in Pamplemousses. After an eventful day we're going funny and giggling; trying to figure out how big the baobab tree is.... :)
This was the last sightseeing we did before Grit had to return to Germany. We enjoyed your stay so very, very much Grit - even if we needed a couple of days to "recover" after all the sightseeing we did! LOL! :)) Hope to see you again soon!
To my readers; do you find it strange I haven't had time at all for crafting these two weeks?! :)) Now it is time for some Christmas gifts etc. :)
Posted by Astrid at 7:56 PM

I love the photo of the tree!! how big it is. It sounds like you had a wonderful time with your friend - I'm so glad it worked out for you, would have been a horrible if it turned out you didn't get along.
Karen
http://karensquilting.com/blog/