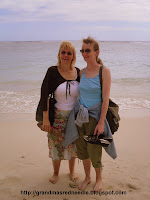 There's not only patchwork/quilting, cross-stitching etc that are my passions... For those of you who don't know, I've been into pen palling since 1976. Through the years it has become a lifestyle rather than passion. Some penfriends have "climbed the ladder" from penfriends to dear friends. Grit is one of them... We started corresponding in 2005 and this year she finally decided to visit me/us. I'm always a bit excited before meeting a penfriend in person. I have heard "horror stories" where penfriends don't turn out to be the same nice person as through the letters. "Touch wood" - through the years I have met some of my penfriends, and never had any bad experiences! I felt Grit & I "hit it off" already that early Sunday morning at the airport. It was no time for crafting these two weeks - let's see what we did instead.

"Ganesh Charturthi" is celebrated the fourth day of the lunar month of August/September by Hindus of Marathi faith as the birthday of Ganesh, the God of wisdom and remover of all obstacles. The first celebration in Mauritius took place in the 7 Cascade Valley, next to Henrietta village, in 1896. The festival has turned out to be a huge National festival, with hundreds of people attending. We had never seen it "live", so it was an opportunity for us to go to Flic en Flac that day. There weren't many people at the beach when we reached there, but it slowly filled up. In the early afternoon hordes of people - some carrying a "statue" of Ganesh - filled the road and ended up at the beach. The road from Quatre Bornes to Flic en Flac was blocked by processions; complete chaos! It took us 3 hours to reach home - usually not more than 15 minutes! :) 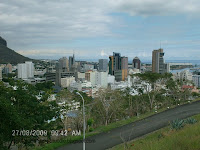 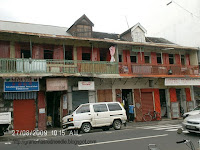 The photos above are from the capital Port Louis. It shows the modern "sky scrapers" as well as an old building in "China Town". It was officially named Port Louis in 1722 by M. Denyon, the commander of the first party of French settlers, but it was first in 1935 Francois Mahe de La Bourdonnais decided build the capital. It was named after King Louis XV. 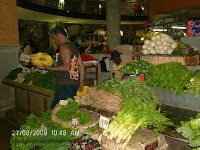 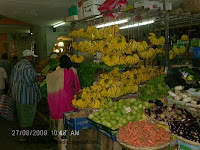 I love the vibrant market in Port Louis! It is a "must" to visit! The stalls sell everything from fruit & vegetables, fish, meat to clothes and all kinds of souvenirs. Usually I don't go into the souvenir stalls; too many "leeches" there, I hate to be pushed shopping! I love to have a glass of "alouda", which is a mix of milk, sugar, water, tookmaria (seeds), agar-agar, vanilla ice cream and ice cubes. Very refreshing on a hot day. I also love to eat "dhal puri", which is lentil flour pancake with beans and curry sauce. Local, delicious junk food! :) 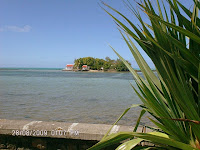 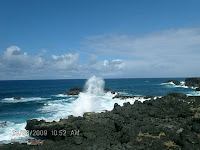 Mahebourg is another "must" to visit. It is the main town in the south, a laid back community with its approx 20 000 inhabitants. To the left is the Mouchoir Rouge island, which has a small, private bungalow on it - with a red roof. It's just so lovely! But I wonder how it is to live out there during a severe cyclone?!

I've always wanted to go to Le Souffleur, which is a blow hole formed in the rocks of the southern coast, through which the sea used to spout spectacularly at high tide. Erosion has deprived it of the power it had 150 years ago when a writer said; "it roared furiously to a height of fully sixty feet"! It still roars a little when the tide is high. I love the wilderness here; furious waves smashing into the lava rocks, filao trees, old stone fences - built by whom?, grassy fields - hardly no tourists here - just so pristine!
To be continued...
Posted by Astrid at 9:23 PM

Astrid it looks like you had a wonderful time and so glad that you hit it off with your "pen" friend. So nice to have that happen. I might be meeting one pen friend in October - not sure yet. We will get home from our trip Friday then I leave for a week with my daughter. I will have to see what happens in October and if Jan can meet if they are still driving through Arkansas then.
Karen