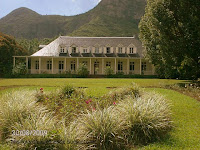 There are not many left of the beautiful colonial houses, but "La Villebague" (left) and "Eureka House" are among the best kept and restored houses. "La Villebague" - built in 1759 - is the oldest house on the island. The side turrets were added in 1934, completely changing the aspect of what was previously a manor house typical of 18th century France. It is usually only houses with one storey that feature turrets, but this house is an exception to the rule. The plantation started producing sugar in 1743, one of the first one to do so.
"Eureka House" was built in 1830. It has 14 rooms and 109 doors and windows! (I'm glad I don't have to clean windows there!) It is one of the largest house of the island and is the only one complete with period furniture. From 1856 to 1896 it belonged to the Le Clezio family. It became museum in 1986.

The day we went to Pamplemousses, we got a lift with hubby's sister who works in the area. We reached her work place a bit early, and while waiting she kindly showed us "Moulin a Poudre", which was an iron factory in the 18th century. A powder mill was in operation until 1810 when the British turned it into a prison. It is said over 800 slaves worked in the manufacturing of gunpowder. It is also said the tower (right) was used for hanging prisoners. The place looks a bit creepy, doesn't it? 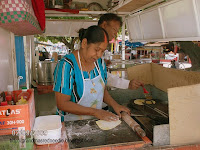 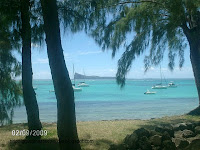 Grit wanted a stop in Grand Baie, which is the only area blatantly devoted to mass tourism. Once it was a tiny fishing village on an idyllic horseshoe bay, but now it is said to resemble a mini St-Tropez, with expensive boutiques, restaurants etc. We strolled around for some minutes, Grit bought a few souvenirs etc. The photo to the left shows a local woman and her husband making dhal puri - for us. Delicious fast food! :)
Traveling along the west coast to the northern tip of the island, we are not far from Cap Malheureux. The island is Coin de Mire (Gunner's Coin) - one of the islands closest to the northern tip (right). It was named so because it resembles the quoin or wedge used to steady the aim of a cannon. The island is a nature reserve and home to a number of rare species, such as the red-tailed tropic bird and Bojer's skink. 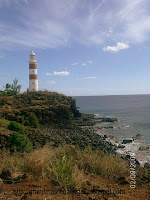 Ever since before I settled here I have wanted to see the lighthouse at Pointe aux Caves - near Albion. I love the rugged coastline, mostly because of the wilderness and because I'm not a person who like roasting myself at beaches. :)) The height of the tower is 97 meters. It was built in 1910 and is still operational.

A few more photos to be continued...