Once farmer - always farmer!
After making the three tote bags for baby earlier this month, I got obsessed and have got a new craze! I have made another three bags, and here they are!
The fabrics I have used is one of the first purchase over the net, in 2008! Perhaps it was high time making something out of it. I've had a look at those fabrics several times since I bought them, but never came up with any idea what to make out of them, until now... 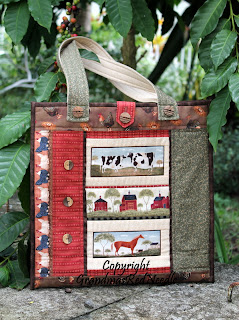 I have used the size of a bag pattern and manipulated the rest to make it 'my way'. I have added one zippered inside pocket. It has gussets, where I have added velcro at the top of each side to hold it together and I've added the closure (?) and buttons (it doesn't have zipper for closing). The front is changed too, and I've added a bottom to it, made from template plastic covered with one layer batting and one layer fabric. It works well. :) 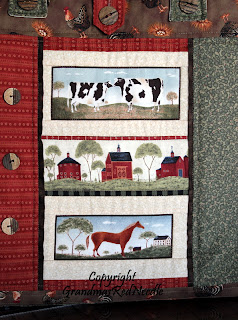 The front. It was a bit difficult to make the panel pieces straight when adding the strips on each side; it was not printed straight on the fabric, so I had to wet, stretch, pull and iron it. It's not OK, but I couldn't make it better. :) 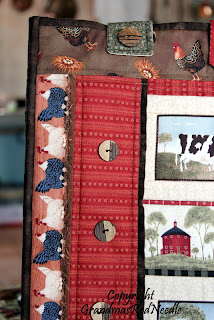 The left, front side; cute hens! :) And the wooden buttons. 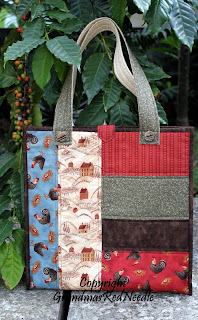 The back of the bag.
Here's another bag, where I have followed the pattern, except the ribbon and buttons, they were not mentioned... 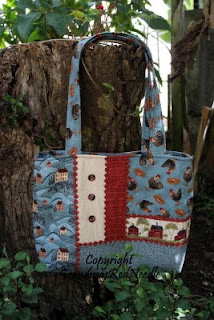 I even managed to do the zipper without any problems! :) Only one broken needle for three bags - not bad - lol! :) This bag has one zippered inside pocket too. 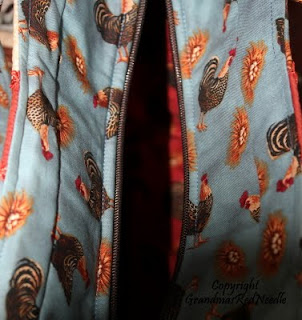 I thought it looked a bit dull without any decoration, so I added ribbon and buttons. Oh, missed the buttons here, but you can see them on the first pic. 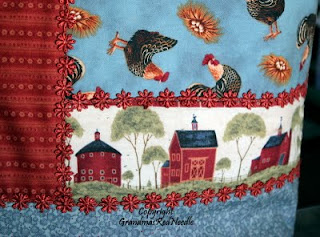 The third bag; same as the blue, but using other colors.
Added ric rac and buttons to this one too. 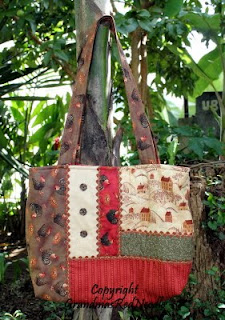 So much fun making bags, and they don't take weeks to do as a big quilt.
From the leftover fabrics I have made a few other things, but that will be for another post.
Posted by Astrid at 7:08 PM 13 comments:

A couple of weeks ago, I received this from my friend Ragna (no blog) in Norway. 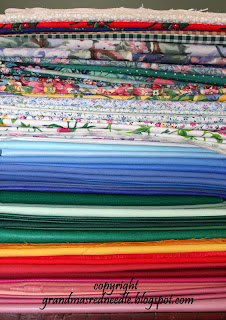 7.7 kg / approximate 17 pound of fabrics! How great is it to have such a friend?! Ragna doesn't quilt anymore, due to some health problems. When she tidied up her sewing room, she thought of me - me - ME!!! Dear Ragna, once again; thank you very, very much! 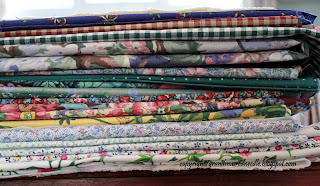 There are quite some florals, which I don't have much of. Some checks as well as some Christmas fabrics. 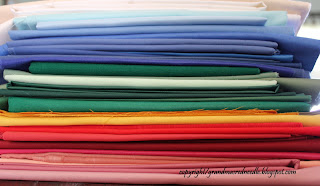 ... and lots of solids! (Which I don't have much of either!) Look at all the yummy colors!
I was quite worried the parcel wouldn't make it all the way to Mauritius, since I didn't receive it after 2-3 weeks! It was sent by airmail and was supposed to take 7-15 business days - they said at the post office where it was sent from. By experience I know parcels never make it in 7 days, except if it is written 'documents' on the envelope. After 3-4 weeks and no parcel, we began to ask at our local post office, and was told they have 'problems with mail from Europe', without explaining that further.... Well, I waited and waited, and finally after 3 months - the parcel arrived!!! Just as if nothing had happened! It was in very good condition, no stamps with 'missent' to any other country or anything... Most probably it has been stuck in transit somewhere in Europe, or..... it could be it has been sleeping in a corner at the custom here too.... only the parcel can tell.... but it won't tell me - lol!
Well, the most important is it DID ARRIVE, even if it took 3 months - instead of 2-3 weeks!
I'm still busy with some bags. I intended to go shopping for velcro (?) and buttons today, but all the house rabbits called me..... They were near to overtake the entire house! :)
﻿
﻿
Posted by Astrid at 6:08 PM 12 comments:

GOSH! I have been busy over the last days!
In my previous post I mentioned I want to do something else rather than cut squares, triangles, rectangles, strips etc... Somehow I feel I'm stuck in what I'm doing - have been doing - since I started quilting 5-6 years ago. I mentioned needle turn applique, landscape quilting, photo quilts etc, but where did I end up? In the same post, I had in mind several things to do, but ended up - as you already may know - making tote bags. 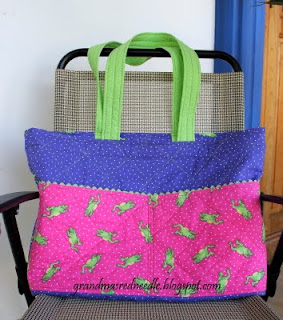 It is so true; to get totally hooked on something, and that is what I did! I didn't make one tote bag only, but three! I got hooked, because of a pocket with zipper! I wanted victory over that pocket! lol! I have used a plain pattern for any tote bag, without any pockets and zippers at all. I decided to make the bag different, by adding one pocket with zipper, one open pocket for the inside, and one open pocket on the front. The latter pockets were not a problem - or any difficulties at all, not even the zipper - but that other pocket..... 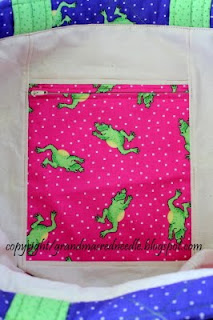 Don't ask me why I decided to add pockets! :) I could have made a very simple tote bag, but that felt so boring! I needed a challenge, and indeed that pocket was a challenge! Without any pattern - I didn't even google I-net for tutorials (too slow connection) - I twisted and turned my brain - and the poor pocket - inside out and upside down in all directions, before it finally decided to co-operate! Or was it my brain cells that suddenly started to work....  For the umpteenth attempt, I decided to take photos along the making, so for the next pocket it should go rather smooth! :) I loved the seam ripper these days! I could have asked MIL next door for help of course, but she is so fast in explaining things so I wouldn't have understood anything!!!! 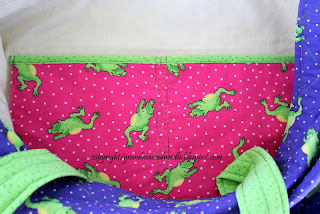 Inside, open pocket with two 'rooms'. 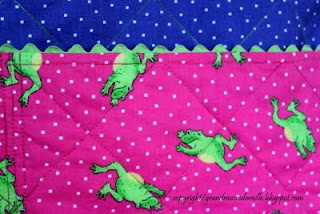 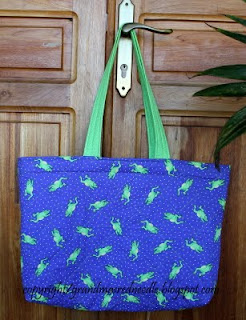 The back of the bag; cute frogs here too! :) 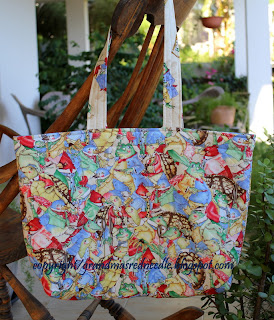 Bag #2 - here I've used the same fabric for both side. It has birds, tortoises, crocodiles etc.
'Woodsy Wonders' fabric line. 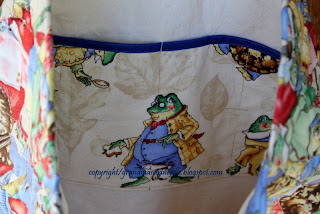 Inner pockets; with and without zipper. 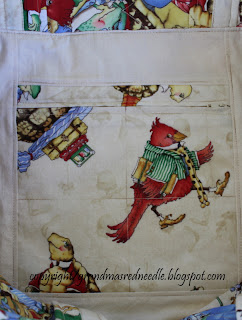 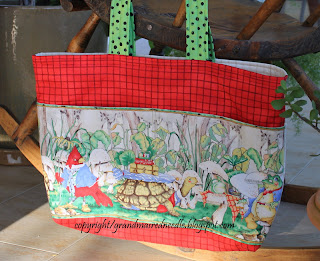 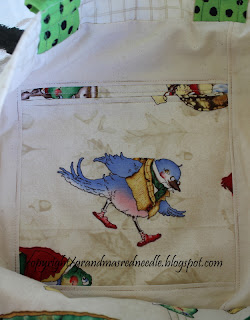 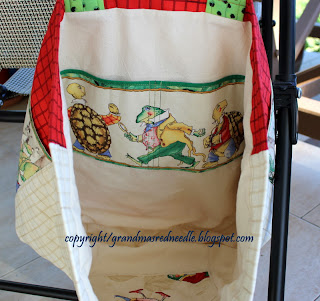 ﻿
Spacious pocket with two rooms on the front.﻿
﻿ 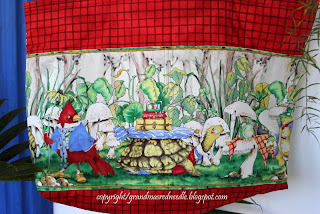 It feels like my head is packed with wool! lol
After been working on big quilts for I don't know how long, I have decided to make some smaller items. I also want to learn more about quilting etc, like needle turn applique, photo quilts, landscape quilting.... I feel I'm kind of 'stuck' in what I'm doing; I can't continue to cut squares and triangles, add them together and make big quilts all the time... :) I love to do that of course, but I feel have to 'develop' myself more to get more knowledge on what I'm doing.
Yesterday morning I had in mind to make a mug rug for a swap... I thought of making a cushion (applique) too, and I even looked for fabric for an applique quilt I've seen in a magazine 3 years ago....
Fickle minded and sidetracked as Gemini's are, I started making something else! :) 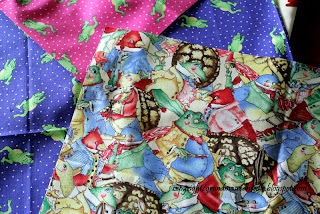 Since I have been working on - and finished (!) - some baby quilts over the last weeks, I decided to continue... Not making quilts, but something else.... 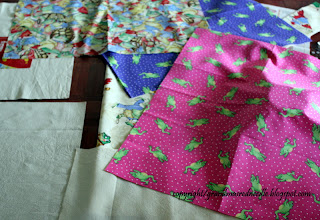 I love these bright, colorful fabrics!
I decided to make a tote bag!
I decided to go for a basic tote bag pattern, but 'on the way' I decided to add some pockets; one (double) open and one with a zip.
This is something I have never done before, and without a pattern it felt like my brain was near to explode! I started working on the bag yesterday afternoon, and no way was I able to figure out how to do that darn pocket - the one with the zip! The zip was not the problem, the problem was how to sew the pocket to the lining! In the end (last night) I gave up, decided to 'sleep on it'.
It did work! I woke up 04:30 this morning and knew how to do the pocket! My brain must have worked overtime during the night! :)) 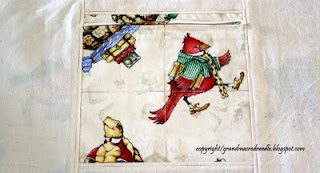 Here the inside pocket with the zip. The upper part of the zip is not as it should be - I saw it afterwards - but that is what I came up with after one nights sleep. :)
The bag is almost done... Another adjustment and it will be finished tomorrow - if not sidetracked again! :))
I believe I have spent more hours unpicking compared to actual sewing hours - lol! I defend myself this is the first tote bag with pockets I've made! :)
﻿
Posted by Astrid at 6:26 PM 8 comments: