The second quilt top I finished, is the Blogger's BOM 2011/2012, hosted by Jackie over at Canton Village Quilt Works. When the BOM started in September 2011, I decided to make two blocks of each to end up with a bigger quilt. I think 13 blocks of 8 inch square is a bit too small to my liking...
It took some time before I decided on the setting. I wanted to set the blocks diagonally, but couldn't decide on blocks in between. The only thing I knew is that I wanted it to be a bigger quilt. 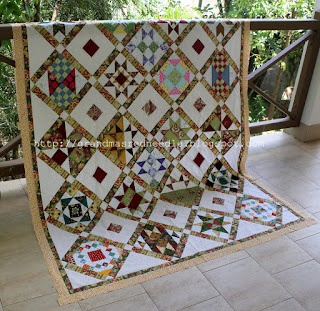 The most difficult was to decide on the design of the 'in-between' blocks and sashing. I tend to buy half or one yard fabrics, and I didn't have anything suitable measuring 1.5 yards. In the end I decided on two different greens on the sashing and using the white tone-on-tone fabric for the extra blocks, the cornerstones for sashing and triangles. I had just enough left of one of the greens I used for the sashing, for a narrow first border and then I've used a yellow floral fabric for the outer border. 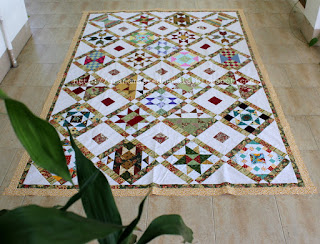 I've noticed after the top was finished that I've made a mistake; I'll have to turn one of the blue-ish blocks in the center... If I don't do it, I know it will haunt me forever - LOL!
You can see Jackie's finished quilt top here.
﻿
Posted by Astrid at 5:14 PM

Your quilt is lovely, Astrid. I like the little blocks you added to it. It's all just beautiful.

Really nice. I like your choice of center blocks, but the overall appearance is awesome.

This one is lovely, too. Great idea to make it larger and I like the solution you came up with.

The colours in the quilt are so lovely...gorgeous quilt.

Love the blocks you added. It makes the quilt larger and more interesting. Your quilt came out beautiful!