HAPPY NEW YEAR EVERY ONE!

December 31, 2011
... only a few hours to go this year. New Year's Eve is usually a quiet Eve for us and it won't be any exception this year. With two dogs and a cat that are petrified firecrackers, we prefer staying with them.

I've had a little 'stocktaking' over WIP's and UFO's today!
Only a few weeks ago I was happy, because I didn't have too many UFO's or WIP's - I thought! My intention was to finish some of the projects during the Christmas days and definitely don't go crazy over some Debbie Mumm fabrics I pulled out from the cabinet! Actually I did (see my previous post), but I didn't manage the Polar Bear quilt - the binding. The binding is done, only left to hand stitch it to the back.

Earlier this year I started working on a stitchery quilt. It has 12 sweet friendship stitcheries. I did a mistake on the first stitchery block... got bored with it and stored it away! I hope for a better start for this one in 2012! :) I have collected different rose fabrics to go with it.
This square is not finished, as you can see. I'm also using scraps (floss) for the stitchery. 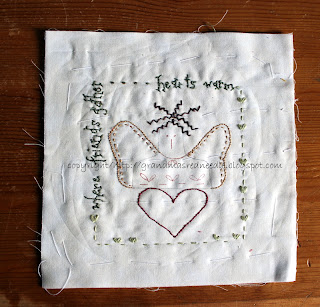 I think it was at the end of 2009 I did this stitchery. It was supposed to be a bag to a girl, but I decided against it, because I thought it became too childish for a teenage girl. Looking at it now... perhaps I'll make a tote bag... I can't even remember how the original bag pattern looked like! Eh... I should have ironed those projects! 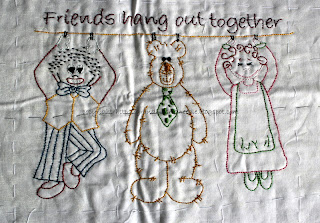 I can't remember when I started working on the 'Colorado Star' quilt; it must be at least 3-4 years ago... I'm going to make quilts for our two sofas in the living room... So far I have 18 blocks. I don't know how many I actually need for one quilt, but not that many left to do - I guess - I haven't measured! :) The blocks measure 18 inches square so I don't think I that many left to make for one quilt. 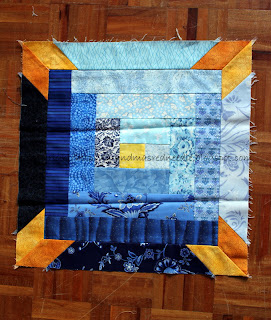 My New York Beauty blocks!
Yes, there are still only four of them! There are three alike and then the poor outsider, where I have used the same fabrics alternated. The blocks are a bit wonky, but they are also the first ever NYB blocks I have made! :) I'm using batiks for the entire quilt.  I have yet to decide on how to proceed..., but I'm quite sure it will end up a big quilt.... 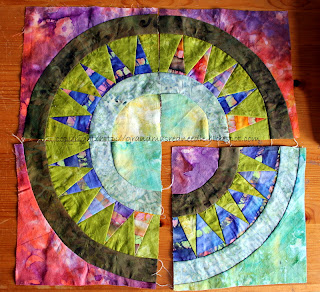 The NNC block swap 2010/2011.
I have 22 blocks, 12 inches square. I'm going to applique Sunbonnet Sue blocks to add to it so that it becomes a good size quilt. Here are blocks from Janet and Nik. I think I'll do another blog post showing all the blocks, yet to do that... but then I'll have to iron them first! :)) 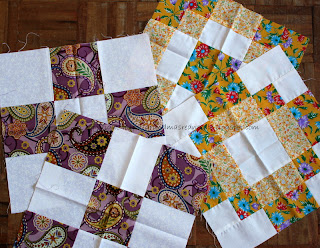 Earlier in December I went crazy over some Debbie Mumm fabrics I have... It turned out to be 6 place mats, 4 tablecloths and 3 table mats! Speak about craze! lol I just love it when I can use from my stash, but for those projects I have to purchase backing from the US. I have a lot of fabrics, but most of it are 1/2's and 1 yard.
Here's one of the table runners - going to be... I LOOOVE stripes and here I have used one too. I already had some polar bear blocks from a winter quilt.. Here I have just added one snowball block in the middle and stripes - easy-peasy! :) 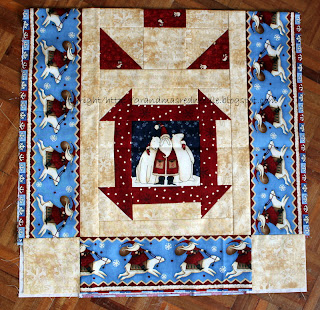 A table topper I have decided to hand quilt! Yes, hand quilt, which is something I have yet to try! I just have to start somewhere and since this isn't a big project, I'll give it a try... 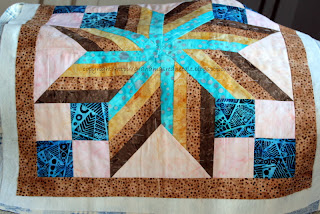 I have shown you some of my WIP's and UFO's, but there are still some I didn't take a pic;
- the Polar Bear quilt
- the 50th birthday gift (quilt) to my dear friend Johnny
- the Postage Stamp quilt
- 12 other Christmas/winter (Debbie Mumm) projects
The aim is not to finish all the WIP's and UFO's in 2012, but if I can finish a few I will definitely be happy! :)
What about you? Done any 'stocktaking' of WIP's and UFO's or any resolutions for the new year?
﻿
Posted by Astrid at 10:57 AM

Happy New Year to you. I am going to try to get done with some of my quilt tops this year - wonder if I will?
Karen

Thanks for posting your WIPs! Now, I know I'm in good company with all of mine. ;-)

Happy New Year! I seem to have quite a few WIP's AND UFO's, too. I haven't taken them out and written them down, though. Year before last, one of the things I wanted to do that year was to finish as many as I could. I did pretty good, then stopped. That would be a great thing to try to do this year!
Thanks for posting all your projects. I love to see what you are doing. It gives me encouragement to get into my sewing area and get going.
~~Lori

Happy New Year!
You have some lovely WIP's and UFO's in your waiting list. And lots to do and keep you out of trouble :)
I have the pillows, my Raggedy quilt and the current BOM to finish. It may sound like a few projects, but to me it is a lot.

Hi! Greetings from Finland! Your quilts are so fantastic! It's so nice to find other quilters all around the world! www.quiltworld2.blogspot.com
Yours, Ulla