A flimsy, surprise gift and other WIPs

I have a flimsy! 320 squares added together! The fabrics are from two layer cakes
'Aviary' by 3 Sisters
'Beach House' by Blackbird Designs
To make it a double size quilt, I need fabric for a border, backing and binding.... not sure when that will be... :) 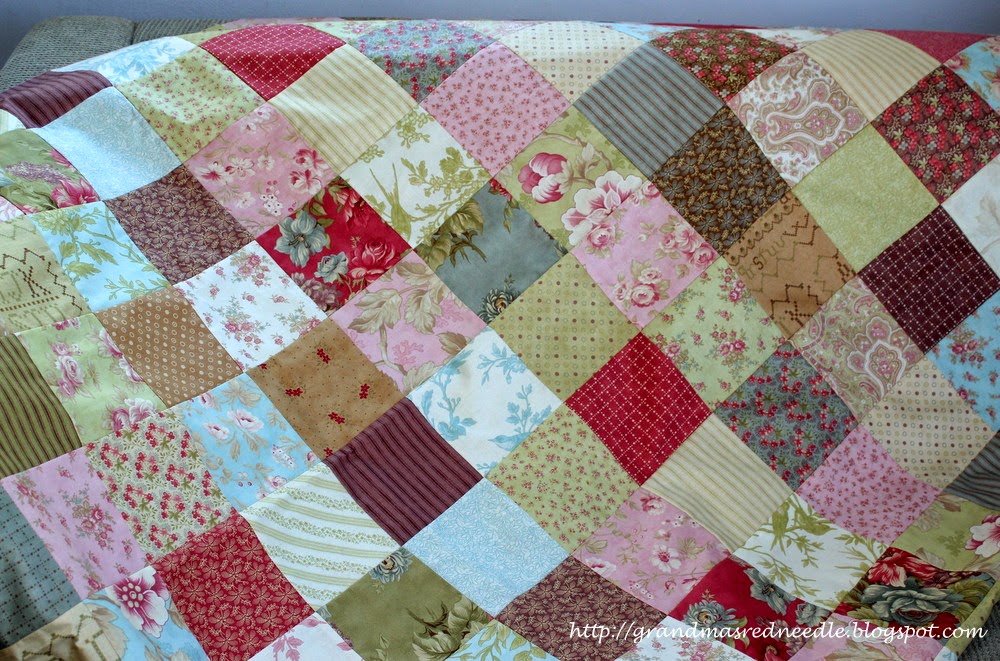 There were 16 leftover squares I turned into a small table topper. 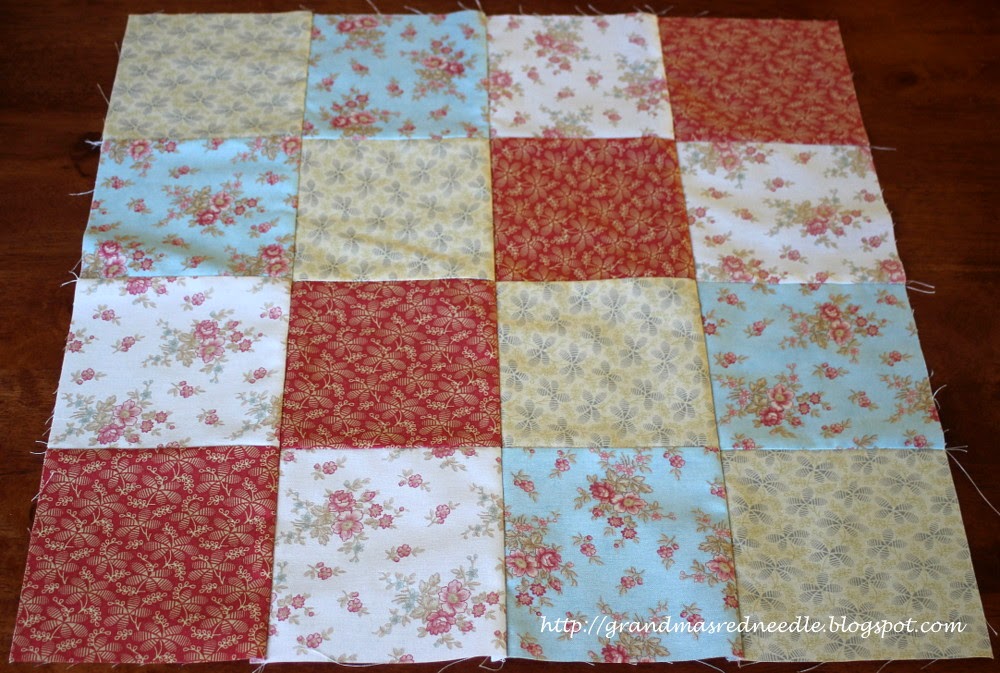 I have sinned!!!
Being on SSD (Strict Stash Diet) I'm not supposed to buy fabrics and other items UNLESS I really NEED IT!
I have stuck to my rule so far this year and bought what has been needed; fabric for custom orders, batting and thread.
Then I read about a 60 degrees ruler and all the possibilities it has... I needed thread as well as refill to a marking pen... and then I saw some beautiful batiks...
You got it! I had to buy it!!! Aren't those batiks beautiful?! 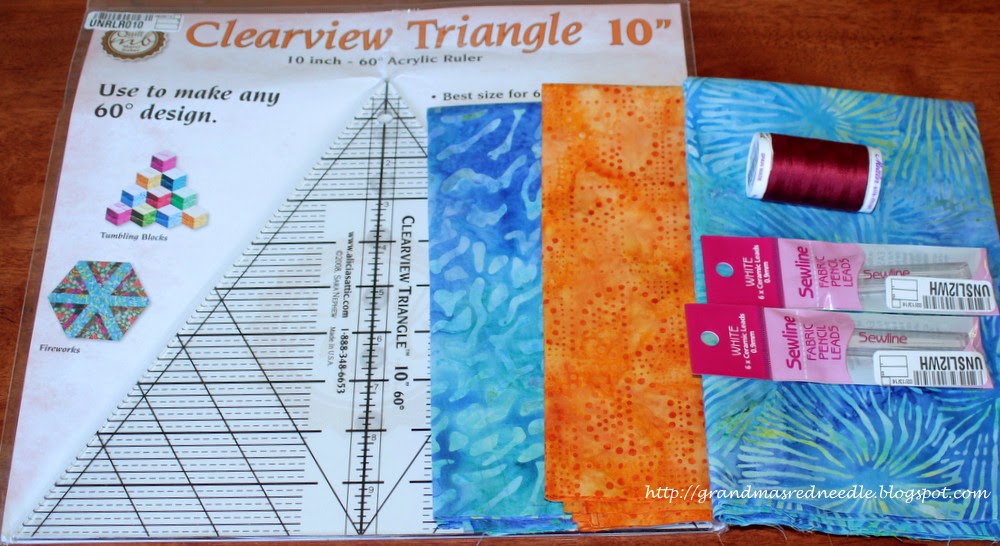 Earlier this week I placed an order for thread and insul bright as well as fabric for a new custom order.
Here's two of the panel blocks I'm going to use for the custom order 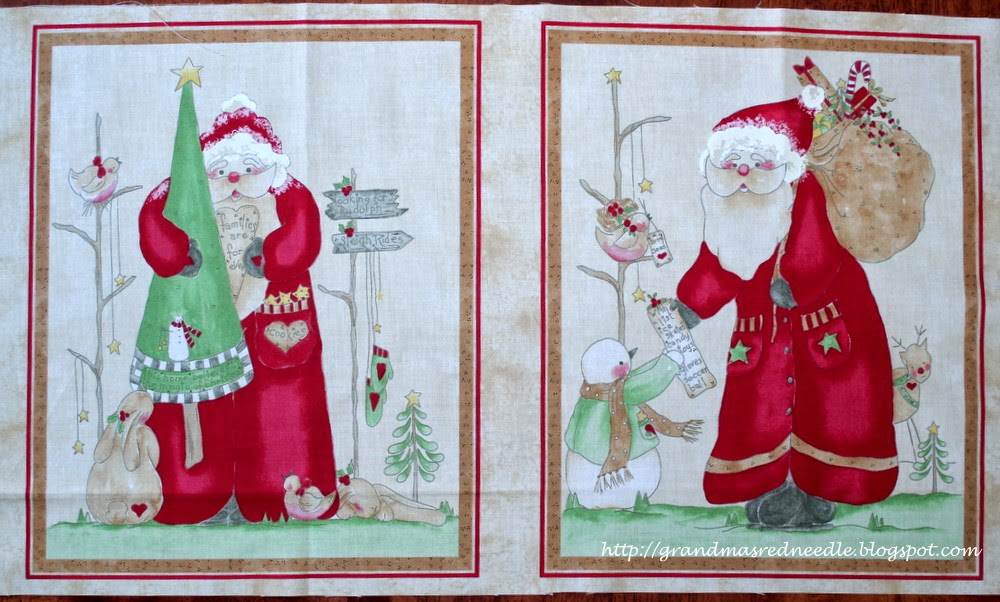 I received a surprise gift from my penfriend Mayumi  in Japan today!


It's an ornament / handcrafted ball,  beautifully decorated with thread. 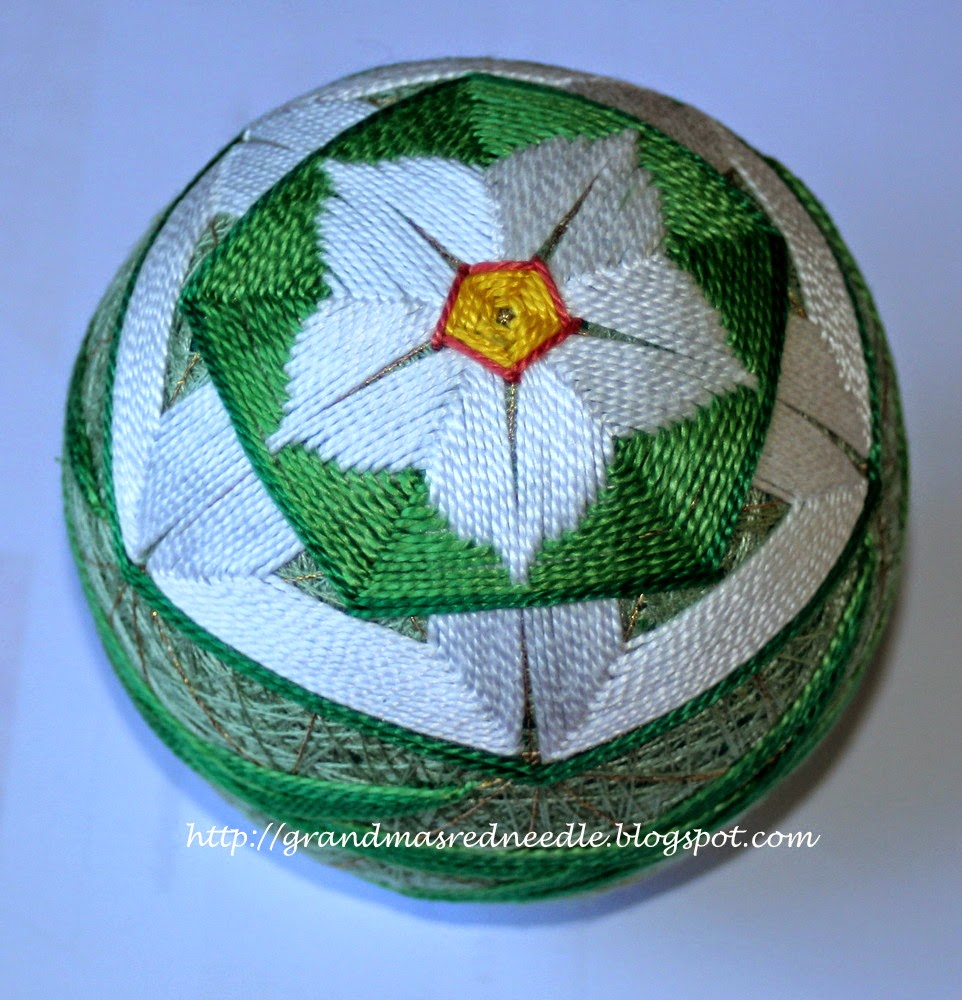 It's so beautiful made and I will treasure it forever!
Thank you so much, Mayumi! 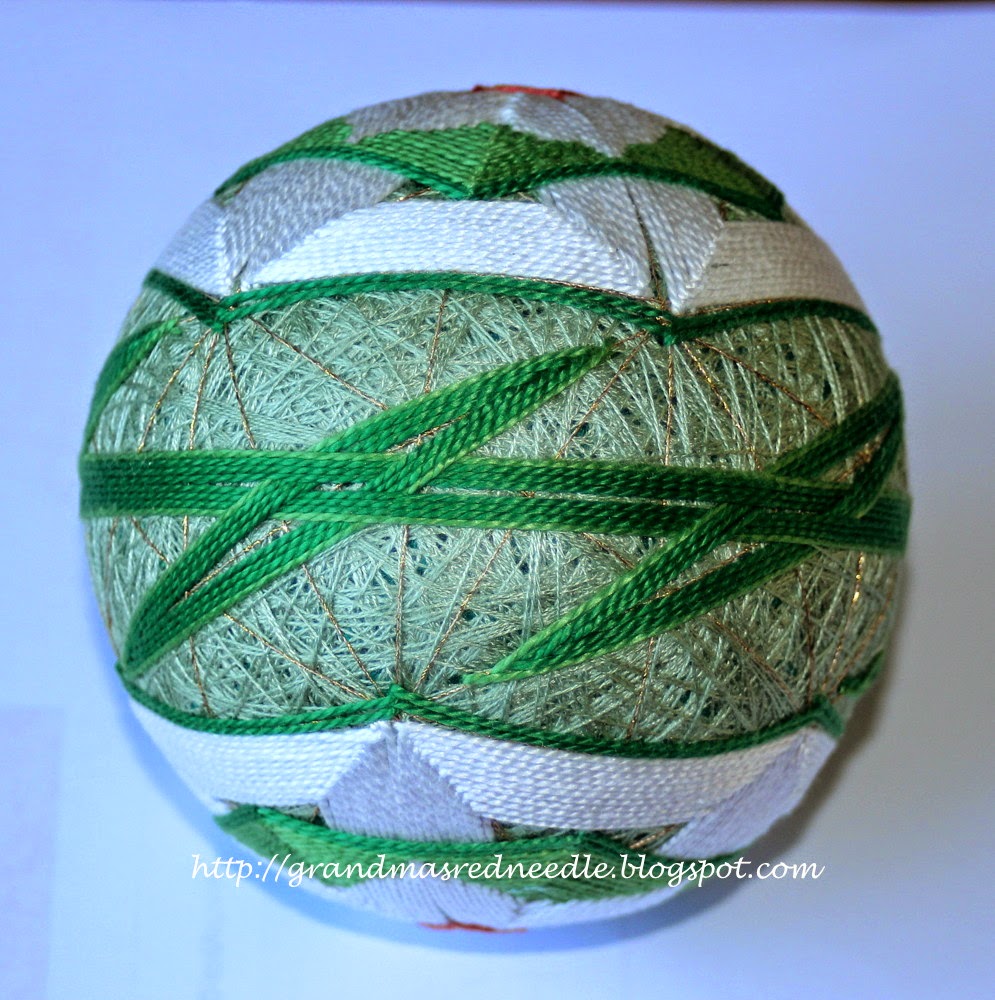 I made this table topper and a runner last year, I think it was..... The idea was to hand quilt both, but since it has not happened by now, I gave in and it will be machine quilted instead! 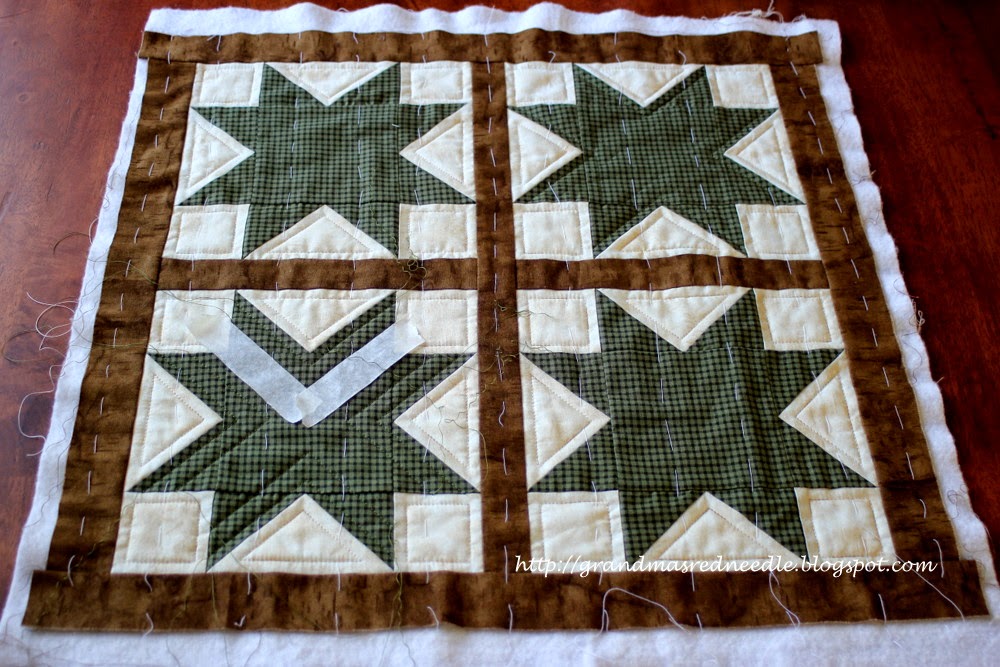 You may wonder about the masking tape? I'm doing straight lines and I find it much easier to use masking tape compared to marking pens on smaller items. Easy to remove and no marks to worry about afterwards. 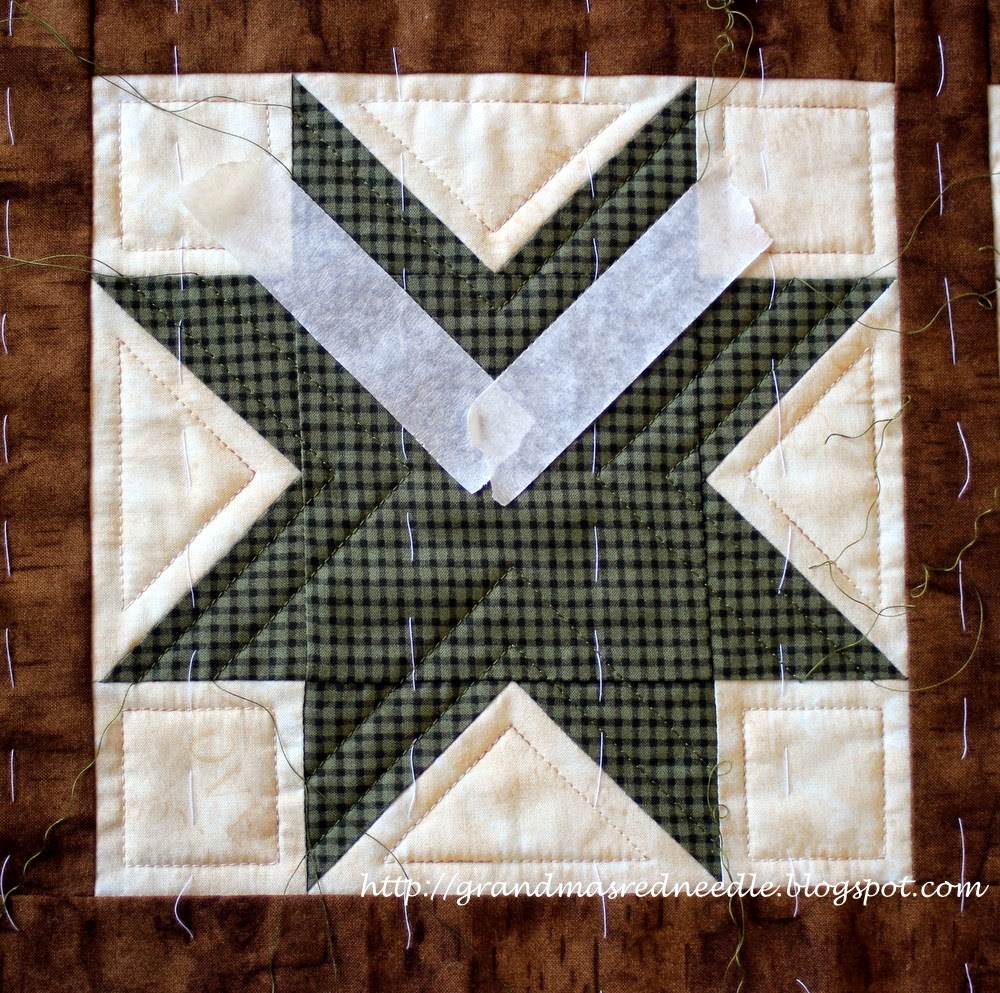 All the 2 inch fabric squares for the PSQ Charm Swap were shipped Monday this week, so in about one week's time I should receive charms from my swap partners.  :)

We observed an amazing half arc rainbow yesterday morning, take a look here.

you have been very busy haven't you! understand totally about the fabric - after all if you are paying shipping and handling you want a full package!

Astrid the Japanese balls look to be complicated to make, they are so pretty.
Thank you for the tip on using masking tape, I would never have thought of it.

I have never used a layer cake although I have one sitting in my cupboard for ages already. I should just go ahead and cut it up like you did and sew it together into a simple but lovely quilt. Since I only have one "cake" I could always cut some more squares from yardage. I really love how yours turned out. Good for you for sticking to your fabric diet. I've not been very good I have to admit, as I've been ordering and buying fabric like there's no tomorrow ;)!

Well, for someone who hasn't gotten around to hemming the coffee table runner, you have certainly accomplished a lot otherwise. Lovely projects!

You have to break out from the fabric diet every now and then!!Love seeing your projects.

Queen Of The Armchair aka Dzintra Stitcheries said...

Lovely Astrid...you certainly have been very busy...your quilt is fantastic!

Sometimes we just need to give in and buy some fun sewing stuff.
that "ball" your friend sent you is so beautiful as are your projects.