Visit to the botanical garden

Ever since I settled here in 2003 I have wanted to visit the botanical garden in Pamplemousses - Sir Seewoosagur Ramgoolam Botanical Garden. It is not that I haven't been there before; I've been there twice, but never on my birthday. Either the weather has been nasty or my back has not behaved. This time I really wanted to go - no bad back and the weather was reasonable in the early morning. We left the house at 06:30 in the morning to catch the bus to Port Louis. We are both early birds, so no problem being out on the street that early. We hit the rush over; the bus took nearly one hour to reach Port Louis - usually it takes less than 30 minutes. In Port Louis we walked it up to Immigration Square where we caught a bus heading north. The garden is situated approx 11 km (7 miles) north of Port Louis, the bus ride didn't take that long and there were no rush over at that side.

Last time we visited the garden we didn't pay any entrance fee, but this time we had to. Mauritians pay 25 rs while I had to pay 100rs - as a non-Mauritian. I don't think that is fair - I am married to a Mauritian. I didn't think of bringing my "alien card" (residency permit), but according to the ticket officer it is only the National Mauritian ID card that is valid. Oh well - 100rs isn't a fortune though... I believe we were the first visitors that morning - it was so quiet and relaxing - pure solitude.

The garden's origins go back to 1729 when a French colonist acquired about half the present site, then called Mon Plaisir. Governor Mahé de La Bourdoonais bought it in 1735, and started a vegetable garden for his Mon Plaisir Château. The garden was also used as a nursery to encourage the growth of plants imported from Europe, the east and South America. In 1770 the garden became the private property of Pierre Poivre, the administrator of the island. In 1810 - when the British took over - it reverted to government ownership, but sadly the British neglected the garden. In 1849 the British horticulturalist James Duncan reinvented the garden as an arboretum for palms and other tropical trees. Today there are approx 500 species of plants, of which 80 are palms and 25 are indigenous to the Mascarene Islands. The entire area covers approx 93 acres (approx 38 hectares). 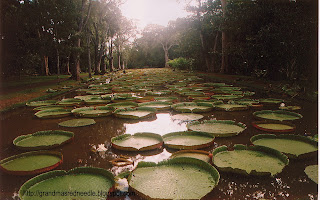 Morning atmosphere over the water lily pond - the huge Victoria amazonica lilies from the Amazon. 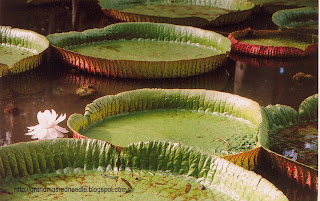 The flowers open for two days only, from the late afternoon to the following morning. The first day they are cream-colored with a heady fragrance, on the second day they are pink. 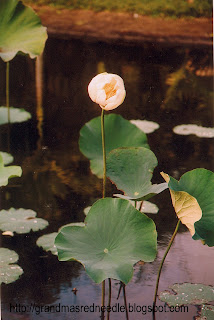 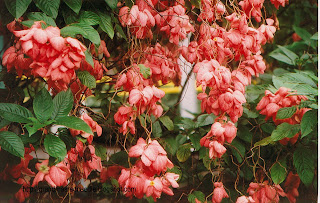 I'm not sure about the name of this beauty - "Mussaenda"?
Posted by Astrid at 1:43 PM

Do you take buses everywhere and do not have a car on the island? Is a lot of things close enough to walk to?
Karen
http://karensquilting.com/blog/