I don't have much to tell today - I think... :)
I had wanted to do some gardening over the weekend, but Saturday it was raining cats and dogs. Some areas got as much as 180mm / 7 inch of rain and some houses flooded. It is the rainy- and cyclone season - we should not forget that! Rain is still needed to fill up the reservoirs.  We did quite a lot in the garden yesterday, you can read about it here.
Since I was stuck inside due to bad weather on Saturday, I did six mug rugs. I had some scraps left from the table topper and pillowcase I made earlier this week, so instead of storing it away I used it on two mug rugs. I forgot to take a photo of the pillowcase, but it looks almost the same as the table topper, and it has the right size! :)) 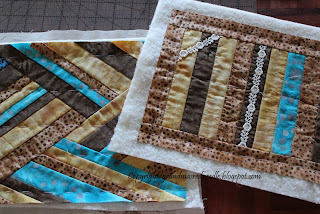 Lots of fun making mug rugs! I remembered I had some tea cup prints and didn't know what to use it for. Some of the tea cups ended up in mug rugs - I made four - here are two of them. They are all ready basted and ready to be quilted. Still no news about "Nina" - I'll have to call again today! :( 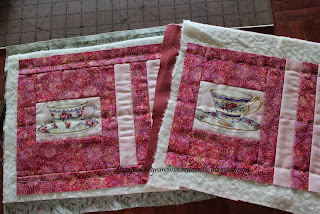 Yesterday morning, before we decided working in the garden, I was going to take my very first step into hand quilting. I have decided to start with the table topper, which isn't that big, it won't be overwhelming and not to hot on my lap.
I got so discouraged when I discovered I can't use the hoop I bought local! :((
This hoop - 12 inch - is not meant for quilting, something I didn't notice when I bought it! The lock has no adjustment, so it is impossible to put anything thicker than one layer of fabric into it. Thinking of it, I'm not surprised, it is meant for embroidering, since Mauritius is not a "quilting-country"! 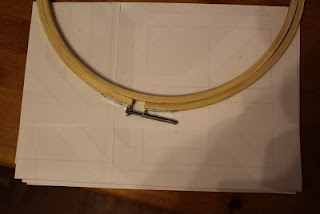 I'll have to look for a hoop from abroad. If any of you know where I can get it, please let me know.  It has to be a web shop that ships internationally. I tried the web shops I usually buy fabrics from, but none of them sell hoops - as I could see.
Posted by Astrid at 5:38 AM

Keepsake Quilting ships internationally I believe - They have hoops. http://www.keepsakequilting.com/products.aspx?search=quilting+hoop

I love those mug rugs. They look very cosy!!! The ones with the tea cups are a clever idea!
Elzaan

Oh I love mug rugs. I mad so many for Christmas presents. It was good to see the end of them, but it was fun making them. Yours are looking great. Small projects I like - Hugs Nat

Queen Of The Armchair aka Dzintra Stitcheries said...

hello from one arm here ha ha...i have had a little try of hand quilting and just couldn't do it...goodluck with finding the right frame astrid, dzintra

Lovely mug rugs, and the tea cups are so pretty!

I've been looking for some new inspiration for mug rugs. Thanks for posting two more ideas.
I just read Angie's blog and came over to visit. I plan on returning.......often.

Your mug rugs are so cute! Do you make them the same as a quilt, except just much smaller? Meaning, do you quilt them like normal, then put a binding on them? Smart to use your leftovers for them.
~~Lori